Aurora was an electronic trading auction system developed by the Chicago Board of Trade in the late 1980s as it considered offering electronic futures trading of its products during non-open outcry trading hours.[1][2][3][4] 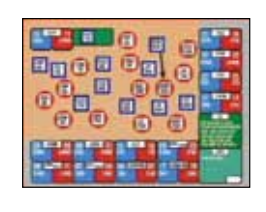 The Aurora project, announced in March 1989 at the annual Futures Industry Association International Conference in Boca Raton, Florida and approved by the CBOT members, consisted of the CBOT and three technology companies; Apple, Texas Instruments, and Tandem.[5][6][7]

At the 1989 FIA Boca Raton Conference, the CBOT "used a combination of lights, slides, booming music and computer graphics to show reporters its Aurora system."[8]

The Aurora system was designed to use Tandem mainframe computers, Texas Instrument artificial intelligence components and and Apple computer graphics.[9]

Aurora was designed to visually replicate the trading pit and use avatars to represent different traders and quantities they were quoting. A trader was only allowed to be displayed in one market at time, just as if one person could only be in one trading floor pit at a time.[10]

A trade was consummated when a user chose a trader with which to deal with by clicking on their avatar using their computer's mouse.[11]

The CBOT reportedly spent $5 million building a Aurora system protype, but then dropped the system to join the CME as a 50-50 partner in Globex in 1990.[12] It would have cost the CBOT another $20 million to implement Aurora.[13] For the Globex partnership, Reuters was paying the $100 million cost to develop the system and was to be paid $1 per trade.[14]

The potential success of Aurora was hampered by a data network that could only handle 19.2 kilobytes of data per second[15] After the CBOT dropped out of the the Globex partnership with the CME, they developed a system called Project A, which used a local area network in Chicago. This nullified the problem with the capacity constraints that impeded the development of Aurora.[16]

Pricing for trades on Aurora were set to be $1 per trade, as opposed to the Globex fee of $4 per trade.[17]

The Aurora trading system was criticized by then SEC Commissioner Joseph Grundfest in 1989 for being more vulnerable to pre-arranged trading because the system allows traders to select their trading partner.[18]