On May 19th 2009, Dalian Commodity Exchange (DCE) announced that polyvinyl chloride (PVC) futures trading would start on May 25th, and that it was revising detailed rules to carry out the launch. On May 18th, the China Securities Regulatory Commission announced it had approved DCE to launch PVC futures.[1]

Each DCE PVC futures contract represents 5 tons of polyvinyl chloride, which is defined as SG5 standard of top-grade and excellence specified by the “Suspension Method General Polyvinyl Chloride (GB/T 5761-2006)” or substitutions at differentials specified by Delivery Rules of DCE as good delivery, and its last delivery date is set as the 2nd day after the last trading day of the delivery month[2].

Each DCE PVC futures contract is subject to a margin rate equivalent to at least 5 percent of contract value (e.g., 1987 yuan = 7948 yuan [V1001 last price on June 5, 2009] x 5 [tons/contract] x 5 percent) as well as a trading fee of no more than 6 yuan per contract. PVC is used for contraction, such as flooring and electrical wiring, as well as in clothing, toys, and upholstery.

In June 2009, the first full month of trading, all DCE PVC futures contacts traded an average daily volume of 132,285 contracts, with a record 382,344 contracts traded on June 9. 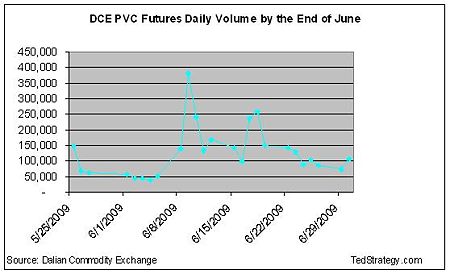