Heath Tarbert is the chairman of the CFTC. He started his term in July 2019.

Congress created the CFTC with the Commodity Futures Trading Commission Act of 1974 as an independent agency with the mandate to regulate commodity futures and options markets in the United States. (Before that time, futures markets were regulated by the Commodity Exchange Authority (CEA), a division of the U.S. Department of Agriculture). The CFTC's mandate has been renewed and expanded several times since 1974, most recently by the Commodity Futures Modernization Act of 2000 (CFMA).[2] In May of 2008, the U.S. Congress reauthorized the CFTC through the Fiscal Year 2013. On July 21, 2010, U.S. President Barack Obama signed into law the Dodd-Frank Wall Street Reform and Consumer Protection Act (Dodd-Frank Act), which expanded the CFTC's jurisdiction and authorities.

William T. Bagley, a lawyer, was appointed by President Gerald Ford as the first chairman of the Commodity Futures Trading Commission, serving from 1975-1978. As keynote speaker at a press dinner on the Chicago Board of Trade's trading floor early in his chairmanship, he established one of the CFTC's oversight goals by telling the crowd something along the lines of that if there was anything "Mickey Mouse" going on in the industry, he would cut off Mickey's ears.

Today, the CFTC assures the economic utility of the futures markets by encouraging their competitiveness and efficiency, ensuring their integrity, protecting market participants against manipulation, abusive trading practices, and fraud, and ensuring the financial integrity of the clearing process.

The CFTC introduced a new fintech initiative in May 2017 called LabCFTC, with Daniel Gorfine at the helm.

On December 15, 2017 the CFTC launched a virtual currency resource Web page, cftc.gov/bitcoin, as a repository for commission-produced resources about virtual currency (aka cryptocurrency).[3] 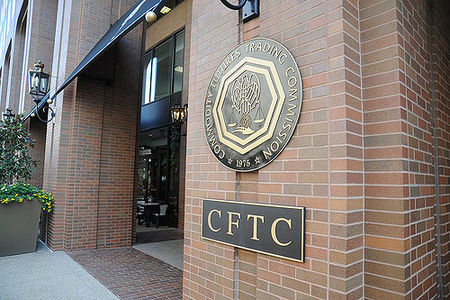 Regulatory Agreement with the European Commission

The CFTC and the European Commission in February 2016 announced a "common approach" to clearinghouse requirements that would pave the way for European regulators to grant equivalence to U.S. clearinghouses. The agreement would allow European CCPs to do business in the U.S. more easily and U.S. CCPs to continue to provide services to EU companies.[4] The deal will also result in millions of dollars of savings daily in the amount of collateral derivatives dealers are required to post.

The European Commission will propose the adoption of an equivalence decision, which will need to be approved by the Member States of the European Union. That vote is expected on Feb. 24. The Commission expects that U.S. CCPs will be recognized by June 21, the date when the mandatory clearing obligation for interest rate swaps starts to take effect.[5]

The agreement is the culmination of three years of sometimes bitter talks over common standards for the global derivatives markets mandated by world leaders after the 2008 financial crisis.[6]

How the CFTC Is Organized

The Commission consists of five CFTC commissioners appointed by the President to serve staggered five-year terms. The President, with the consent of the Senate, designates one of the commissioners to serve as CFTC chairman. No more than three commissioners at any one time may be from the same political party.

The chairman's staff is also responsible for liaison with the public, the Congress, and the media. The Office of External Affairs (OEA) is the Commission's liaison with the domestic and foreign news media, producer and market user groups, educational and academic groups and institutions, and the general public. OEA provides timely and relevant information about the Commission's regulatory mandate, the economic role of the futures markets, new market instruments, market regulation, enforcement actions, and customer protection initiatives, actions, and issues. OEA also provides assistance to members of the media and the general public accessing the CFTC's Internet Web site. The Commission serves in an advisory capacity to the Alliance for Investor Education.

The CFTC monitors markets and market participants closely by maintaining, in addition to its headquarters office in Washington, offices in cities that have futures exchanges — New York, Chicago, Kansas City, and Minneapolis.

Division of Market Oversight (DMO) The Division of Market Oversight has regulatory responsibility for initial recognition and continuing oversight of trade execution facilities, including new registered futures exchanges and derivatives transaction execution facilities. The regulatory functions of the Division include, among other things, market surveillance, trade practice reviews and investigations, rule enforcement reviews, review of product-related and market-related rule amendments, and associated product and market-related studies.

Swap Dealer and Intermediary Oversight (DSIO) The Division of Swap Dealer and Intermediary Oversight oversees the registration and compliance of intermediaries and futures industry self-regulatory organizations (SRO's) including U.S. derivatives exchanges and the National Futures Association (NFA). Under Dodd-Frank, DSIO also will be responsible for developing and monitoring compliance with regulations addressing registration, capital adequacy and margin requirements for swap dealers and major swap participants.

Division of Enforcement (DOE) The Division of Enforcement investigates and prosecutes alleged violations of the Commodity Exchange Act and CFTC regulations. Violations may involve commodity futures or option trading on domestic commodity exchanges, or the improper marketing of commodity investments. The Division may, at the direction of the Commission, file complaints before the agency's administrative law judges or in the U.S. District Courts. Alleged criminal violations of the Commodity Exchange Act or violations of other Federal laws which involve commodity futures trading may be referred to the Justice Department for prosecution. The Division also provides expert help and technical assistance with case development and trials to U.S. Attorneys’ Offices, other Federal and state regulators and international authorities.

Office of Chief Economist (OCE) The Office of the Chief Economist is an independent office with responsibility for providing expert economic advice to the Commission. Its functions include policy analysis, economic research, expert testimony, education and training.

Office of the Executive Director The Office of the Executive Director (OED) formulates and implements the management and administrative policies and functions of the agency. OED staff formulate the agency's budget, supervise the allocation and use of agency resources, promote management controls and financial integrity, and develop and maintain the agency's automated information systems. The Office of Proceedings, which is under the administrative direction of OED, provides an inexpensive and expeditious forum for handling customer complaints against people or firms registered with the National Futures Association (NFA) through its reparations program. The Office of Proceedings also hears and decides enforcement cases brought by the Commission.

The CFTC regularly issues various weekly, monthly or annual reports,[19] including Commitments of Traders reports[20], Cotton On-Call[21], Bank Participation in the Futures and Options Markets[22], CUSIPS Delivered for CBOT Treasury Futures Contracts (maintained by Chicago Board of Trade)[23], Futures Industry Registrants by Location[24], and Financial Data of FCMs[25] and others.