The SGX was created on Dec. 1, 1999, following the merger of the Stock Exchange of Singapore and the Singapore International Monetary Exchange, and successfully demutualized and listed its shares on its own bourse in December 2000. Five years later SGX expanded into commodities trading through a joint venture with the Chicago Board of Trade called the Joint Asian Derivatives Exchange (JADE). Later that year the SGX re-launched Catalist, its second listing board for faster-growing securities that was previously known as SESDAQ.[3] In 2009 SGX formed a joint venture with Chi-X Global to launch the world's first exchange-backed dark pool due to commence in mid-2010.

In 2009 the SGX was officially recognized for its outstanding over-the-counter (OTC) derivatives market, SGX AsiaClear, by receiving its second Asia Exchange of the Year award from Energy Risk magazine.[4] In granting the award, presenters cited the SGX's new product innovation in areas such as clearing mini fuel oil contracts and OTC cleared iron ore swaps. SGX AsiaClear, launched by the SGX in 2006, is Asia's only OTC clearing platform for traded derivatives and currently boasts 424 counterparties.

SGX also entered into several agreements with other exchanges, including a deal in mid-2009 with Norway's Oslo Børs (Oslo Bourse) to co-operate on secondary listings in energy, oilfield services and shipping.[5]

Later in 2009, the SGX announced a joint market-development agreement with Taiwanese exchange GreTai Securities Market as part of SGX's "Asian Gateway" strategy for market growth.[6] The SGX forged joint ventures with exchanges in India and Taiwan and plans to be the world's first official trading exchange to back an investment dark pool.

In July of 2012, SGX and Securities Investors Association (SIAS) announced they would sign a memorandum of understanding (MOU) to formalize their commitment over the next three years to bring investing to the community.[7]

In addition, SGX-DC and SGX's securities clearing house, The Central Depository, had also applied to the ESMA for recognition as a third party CCP in order to continue providing clearing services to European Union customers. [8]

In May of 2014 SGX hired Ringo Chiu, former CEO at Citic Securities International, to head a new office in Hong Kong focused on derivatives. [9]

In 2014, SGX expanded its suite of foreign exchange futures to include currency futures contracts on Chinese renminbi (RMB), Japanese yen and Thai baht. [12]

In November 2014, the Singapore stock exchange announced plans to begin a bond-trading platform by the middle of 2015. It will begin by trading Asian corporate bonds in G-3 currencies and follow that with Asian local currencies. SGX formed a unit, SGX Bond Trading, to offer the products and signed a contract with technology provider TradingScreen.[14]

In January 2015 it was reported that the exchange was in talks with the China Securities Regulatory Commission to begin trading Chinese equity-index options, beginning with options on the FTSE China A50 Index. [15]

On August 29, 2016 SGX launched the SGX APAC ex Japan Dividend Leaders REIT Index, composed of 30 real estate investment trusts (REITs) across the Asia Pacific ex Japan region. It will be the first SGX index to be used as a benchmark index for a new exchange-traded fund (ETF) issued by Phillip Capital Management. It is composed entirely of REITs in the Asia Pacific region that are dividend weighted.[16]

The Singapore Exchange finalized a deal on Nov. 7, 2013 with the London Stock Exchange Group's MillenniumIT to supply the technology for an upgrade of SGX’s securities clearing systems to process deals in cash products such as equities and bonds. [17]

SGX has an arrangement with Nasdaq to use its Genium INET technology to support the SGX trading and clearing platforms.[18]

In 2015 the exchange expanded its reach into the US market with a technology deal with the CME Group, which uses CME's data facility in Aurora, IL as an access hub to directly connect North American SGX customers to SGX. The deal allows customers to offset positions on a number of contracts between SGX and CME Group, with 24-hour trading access and risk management. SGX also has data center links with other exchanges such as the Australian Securities Exchange, Eurex, Hong Kong Exchanges & Clearing and Japan Exchange Group.[19] 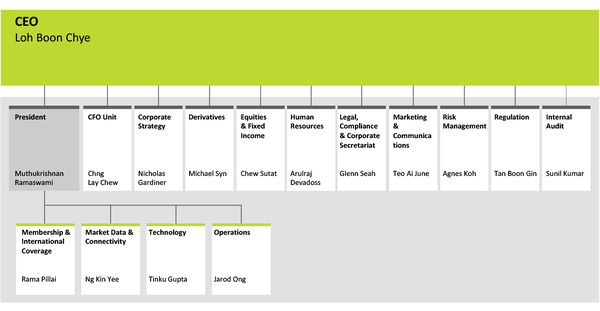 The SGX has continued its trend of linking up with exchanges well beyond its shores to add trading volume and value. In March 2010 SGX joined with the National Stock Exchange of India (NSE) in a memorandum of understanding (MOU) to develop further NSE-linked products for listing on the SGX similar to its deal to list S&P CNX Nifty Futures, which have traded in Singapore since 2000.[20] As well as adding products, the SGX and the NSE will also explore bilateral trading links to allow the users of one exchange to also trade the other exchange seamlessly.

In February 2010, a handful of ASEAN countries including Singapore chose NYSE Technologies for the technology that would link their respective exchanges for growth in the region. The Singapore Exchange, the Stock Exchange of Thailand, the Philippine Stock Exchange, Bursa Malaysia and the Indonesia Stock Exchange are involved in the project. [21]

In October of 2010, the Singapore Exchange and the Australian Securities Exchange entered into a merger agreement intended to create Asia's second largest exchange group behind Hong Kong Exchange and Clearing. SGX offered the equivalent of US$8.2 billion for the Australian Exchange.[22] However, in April of 2011 the Australian government blocked the merger and ASX withdrew its bid.

In August 2011, SGX launched its Reach trading engine in an effort to improve market quality and liquidity. It is the world's fastest trading engine and offers 10 times more capacity.[23]

On Oct. 1, 2014 SGX acquired the remaining 51 per cent stake in the operator of Singapore's national electricity market, Energy Market Co (EMC) for $23 million, giving it a platform for electricity and other energy futures contracts. SGX had already bought 49 per cent of EMC in August 2012. NEMS is the first liberalized spot electricity market in Asia. The Energy Market Authority (EMA) regulates EMC.[24] SGX began trading electricity futures in June 2015.[25]