David Herron is former chief executive officer of the Chicago Stock Exchange. He stepped down from that position on April 18, 2014 and was replaced by the exchange's COO, John Kerin. [1]

Herron led the exchange since 2002, overseeing its transition from a floor-based operation to an electronic exchange and the demutualization of the company, as well as the establishment of computerized matching engines in Chicago and New York.

Herron took over as CEO of Chicago Stock Exchange in November 2002, succeeding A.D. Frazier Jr. Before that, he served as vice president, listed equities for Charles Schwab & Co. [2]

Herron began his career as a floor reporter (runner) on the Pacific Stock Exchange and went on to serve as a member/specialist before moving on to the Boston Stock Exchange in 1982. Herron joined Fidelity Investments as a specialist in 1984 and departed in 1998 as vice president, specialist trading, overseeing operations on the Boston, Pacific and Cincinnati Stock Exchanges. 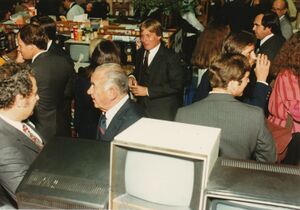 Dave Herron is pictured here in 1982 at the 100th anniversary celebration of the San Francisco Stock Exchange.

In 1982, Herron helped celebrate the 100th anniversary of the San Francisco Stock Exchange, a precursor to the Pacific Stock Exchange.