Gerstenberg & Company was a Chicago Board of Trade member firm founded in 1856 by Charles Gerstenberg.[1][2][3][4][5] Charles son Erich joined the CBOT in 1879 and son Adolph joined in 1882 and Gerstenberg & Company had four generations of Gerstenbergs that worked for the company before it was sold to fellow CBOT firm O'Connor & Company, Inc. in 1986.[6][7][8] 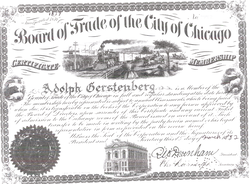 Adolph Gerstenberg's father, Charles, had been a charter member of the Chicago Board of Trade in 1848. Four generations of Gerstenbergs served on the board of directors of the CBOT.

Gerstenberg became a clearing member of the CBOT in 1915. The cleared owned and leased grain elevators and cleared agricultural futures business for commercial grain firms and local traders.

Raymond A. Gerstenberg. was also a partner of the firm. He also served as a member of the board of the CBOT.[9] He passed away in 1986.

Adolph Gerstenberg, son of founder Charles, served as a director of the CBOT and chairman of the grain committee.

Erich Gerstenberg, son or Charles, worked for the firm, left to form his own firm, then later rejoined the firm in 1899 and worked with his brother Adolph.