Occupy Wall Street is a series of demonstrations that began on Sept. 17, 2011. The goal of these events is described as protesting corporate greed, economic inequalities, and the impact of corporate lobbyists in government.

The protests first began in New York, but by October of 2011 similar protests were either planned or already being held in several other major cities, including Washington D.C., Chicago, Los Angeles, Boston, New Jersey.[1] The protesters refer to themselves as "the 99 percent," or the population outside of the top one percent of income earners. 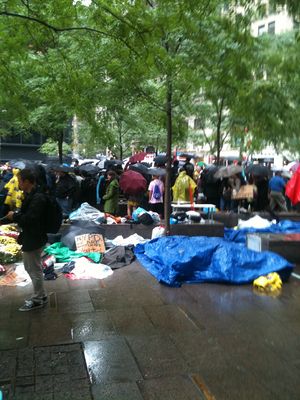 The protests were originally called for by Adbusters, a Canadian activist group in mid July of 2011. According to Adbusters, the central demand of the protests is for President Barack Obama to "ordain a Presidential Commission tasked with ending the influence money has over our representatives in Washington."[2] Some participants of the protests have also made other demands, such as raising taxes on corporations and the rich, ending corporate welfare, protection for Medicare and Social Security, and support for trade unionism.

The Occupy Wall Street protesters posted their first official press release on Sept. 30, 2011. The release included a list of the grievances they wanted to be addressed.[3]

The protests were influenced by earlier movements like the Arab Spring movement[4] (such as the protests in Cairo, which began the 2011 Egyptian Revolution), which used social media to gain public awareness and support. Protesters began to complain early on that the mainstream media wasn't giving the movement the attention it deserved,[5] so the protesters began to use Twitter, Reddit, and other social media sites in an effort to gain support.

Several instances of arrests have occurred since the beginning of the protests. Over 700 arrests were made on Oct. 1, 2011, when the protesters attempted to march across the Brooklyn Bridge, failing to remain on the pedestrian walkway, and walking out into vehicle lanes, blocking traffic. Some protesters claimed that police had lured the protestors onto the vehicle lanes, however police have denied the claims, and have released videos that show officers warning the protestors to remain on the pedestrian walkways with bullhorns.[6]

Another 28 arrests occurred at night on Oct. 5, 2011, when a group of protestors attempted to storm the barricades blocking off Wall Street. The group had been part of a much larger demonstration involving 10,000 to 20,000 people that took place earlier,[7] marching to Foley Square north of New York's City Hall. Those attempting to storm the barricades were described as "the occupiers and other young people, looking for a confrontation,"[8] and police responded by shoving the protesters, using pepper spray, and one officer also used a baton to keep the crowd back.[9]