Salomon Brothers was formed in 1910 and for many years until the early 1990s it was one of Wall Street's most powerful investment houses. The list of its former directors and executives include the legendary investor Warren Buffett, former New York City Mayor Michael Bloomberg and Reagan-era economist David Stockman.[1] 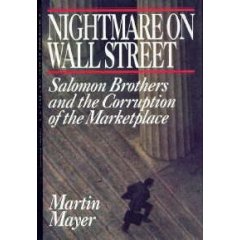 But in 1991 Salomon was caught fraudulently bidding for U.S. Treasury bonds in a $10 billion scandal meticulously revisited in Martin Mayer's 1993 book "Nightmare on Wall Street: Salomon Brothers and the Corruption of the Marketplace."[2] Salomon Brothers never recovered from the scandal and was subsequently acquired in 1997 by Travelers Group, which merged it with the previously-acquired Smith Barney brokerage to form Salomon Smith Barney (SSB). A year later Travelers merged with Citicorp to become Citigroup but SSB continued to operate until 2003, when another trading scandal forced a final name-change to Citigroup Global Markets.