MiFID II (Markets in Financial Instruments Directive II or MiFID Review) is the second version of the MiFID directive. MiFID is a set of European Union regulations on the financial industry. It regulates companies that assist clients with "financial instruments" which include bonds, shares, units in collective investment schemes, and derivatives. [1] Some of the main goals of MiFID II are to provide an organized manner of trading these financial instruments in a more structured environment, improve the transparency of the markets, decrease the cost of market data, and to reduce risk.[2] [3] The first MiFID imposed new rules for equity trading across 30 European countries when it became law on Nov. 1, 2007, but traders argued that it should be expanded. This second version of MiFID is intended to tackle some of the issues missed by the original document. For example, it addresses concerns over high frequency trading.[4] 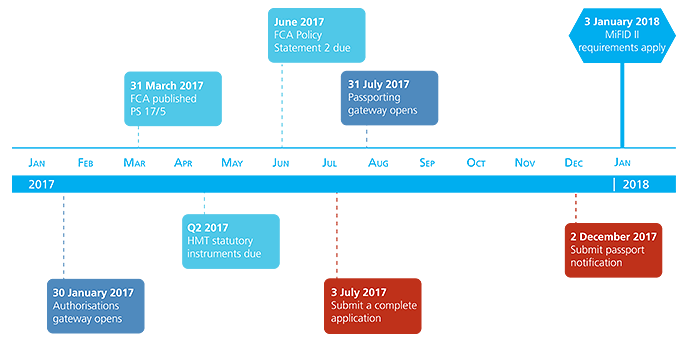 MiFID II will further increase the supervision and governance process in coordination with the European Securities and Markets Authority in order to decrease risk and to facilitate investor protection. [6]. Another aspect of increasing the power of authorities is the use of sanctions. MiFID II has harmonized administrative sanctions. These sanctions address the concern that degrees of sanctions varied a lot across member states in the past. [7]

Whistle-blowing is another aspect of monitoring that is addressed by MiFID II. MiFID II requires that employees of financial institutions are able to bring to light “potential or actual breaches” of provisions implementing MiFID II without being subject to retaliation for their actions.[8]

One way that MiFID II attempts to manage risk is through an implementation of limits and controls. For example MiFID II implements: pre-trade controls, post-trade controls, real-time monitoring, position limits for clearing members, and position limits for commodity derivatives. Another way that MiFID II seeks to manage risk is through more heavily regulating the recording of, storage of, and retrieval of communication and data.[9] Specifically, MiFID II states that “Records shall include the recording of telephone conversations or electronic communications relating to, at least, transactions concluded when dealing on own account and the provision of client order services that relate to the reception, transmission and execution of client orders.” [10]

All subject to a final policy statement due at the end of June, 2017: MiFID II addresses conflicts of interest. Conflicts of interest are required to be identified, prevented, and managed. If one can not prevent a conflict of interest, then it needs to be reported to one's client in a specific manner. There are other things that clients will need to be informed of as well besides conflicts of interest. Under MiFID II, clients need to be informed of costs and charges. Requirements for periodic reporting for discretionary managers is also changed by MiFID II. Specifically, the frequency of these periodic reports increases. [12]

MiFID II lays out the responsibility and function of the management body. MiFID II defines the management body as the one that “defines, oversees and is accountable for the implementation of governance arrangements that ensure effective and prudent management of the investment firm including the segregation of duties in the investment firm and the prevention of conflicts of interest.” MiFID II also mandates that management bodies comply with governance arrangements and requirements in the Capital Requirements Directive or CRD IV. [13]

High Frequency Trading is the practice of engaging in a large quantity of transactions in seconds or fractions of a second by using: "infrastructure that is intended to minimise latencies such as co-location, proximity hosting or high speed direct electronic access; system determination of order initiation, generating, routing or execution without human intervention for individual trades or orders; and high message intraday rates which constitute orders, quotes or cancellations." [14]

High Frequency Trading Firms will be required to:

MiFID II creates the Organised Trading Facility (OTF). The original MiFID only covered multi-lateral trading facilities. The OTF is a multilateral trading venue for non-equities to trade. The goal of the OTF is to create an equal playing field with neutral OTF operators. To increase competition in the marketplace, MiFID II also establishes a non-discriminatory access regime.[18][19]

Under MiFID II investment firms will be required to "unbundle" research. Firms that have both execution and research services will be required to supply and price these separately. This new regulation is aimed mostly at the European Union but it will also effect the United States as well. This requirement may be especially difficult for the U.S. as it conflicts with U.S. law that prohibits this kind of separation. [20]

Those who criticize MiFID II have several concerns. Some of them include: No one knows how it will actually work in practice, there is a level of uncertainty. Implementing MiFID II may be somewhat difficult. It is uncertain if end clients will actually benefit from this legislation or not. Europe may possibly lose some business to different part of the world because of regulatory effects.[21]

There are also many who praise MiFID II for many reasons. It is thought by many that MiFID II will bring more transparency to markets, create more structure in the markets, lower the cost of market data, and costs will become more explicit. [22]

It is estimated that MiFID II will have a one time compliance cost between €512 and €732 million and continuing costs of between €312 and €586 million per year.[23]

On September 25, 2012, the Committee on Economic and Monetary Affairs agreed unanimously to introduce MiFID II to the European Parliament, which later approved the measure. The Council of Ministers is expected follow suit, leaving the European Securities and Markets Authority (ESMA) to suggest detailed rules to the commission. The changes to MiFID resulting in MiFID II are currently set to take effect starting January 3, 2018, including a revised MiFID and a new Markets in Financial Instruments Regulation (MiFIR).[24] [25][26] According to the European Parliament's web site, all trading venues must ensure that trading systems are resilient and prepared to deal with sudden increases in order flows or market stresses. These could include 'circuit breakers' to suspend trading. Additionally, all orders "should be valid for at least 500 milliseconds, i.e. must not be cancelled or modified during that time."[27]

MiFIDII has similar objectives and covers similar areas as laws like the Securities Exchange Act, the Commodity Exchange Act, and the Dodd-Frank Act in the United States.[28]MiFID II migrates the European regulatory landscape from a principles-based philosophy toward a more U.S.-style rules-based regulatory regime. It also extends the MiFID framework across asset classes and into markets in which central bid/offer markets and pre- and post-trade transparency have never existed. This is expected to have a tremendous impact on how OTC markets operate.[29] The possible extension of MiFID’s transparency requirements to non-equity markets is one of many areas the European Commission is expected to investigate, in line with the European Central Bank’s (ECB) efforts with the code of conduct for clearing and settlement.[30]

On January 14, 2014, the European Parliament, European Commission (EC) and Council of the European Union (EU) finished a crucial round of negotiations on Mifid II. The directive introduced a range of reforms that cover the trading of equities away from public stock markets, competition among derivatives markets and clearing houses, speculation in commodity and commodity derivatives markets, the ability of firms in non-EU countries to offer financial services in the EU and controls on electronic and high-frequency trading.[31]

In the new revised directive, OTFs are introduced to improve trading transparency in bonds and swathes of the world's $640 trillion over-the-counter financial derivatives. EU legislators decided to restrict the category to non-equities only.

The Insurance Mediation Directive (IMD 1) was amended through the revised MiFID II. [32]