The Wholesale Markets Brokers' Association Americas Inc. was formed by a group of North America's leading inter-dealer brokers to promote the standards of the industry and a better understanding of the role played by wholesale brokers in the functioning of financial markets.

The five founding members of WMBA Americas are BGC Partners, GFI Group, ICAP, Tradition, and Tullett Prebon. They founded the association on July 13, 2009.

The association seeks to work with Congress and key public policymakers on future regulation and oversight of over-the-counter (OTC) markets and their participants. [1]

In September of 2015, ICAP confirmed that it was pulling out of the WMBAA, saying that since the U.S. had created and implemented Dodd-Frank the bulk of global regulatory reform efforts had moved to Europe and beyond, and therefore ICAP's efforts were best directed outside of WMBAA membership.[2]

The WMBAA was formed in July 2009 in order to "promote the quality and standards of the industry and a better understanding of the critical role played by wholesale brokers in the efficient functioning of financial markets."[3]

On October 12, 2011, WMBAA Chairman Chris Giancarlo testified before the House Committee on Agriculture on the subject of proposed changes to the Dodd-Frank Act regarding swap execution facilities.[4] His testimony was summarized into a commentary featured on MarketsReformWiki.

EmbedVideo was given an illegal value for the alignment parameter "425". Valid values are "left", "center", "right", or "inline".


Since 2010, the WMBAA has hosted its annual SEFCON conference in New York on issues surrounding swap execution facilities (SEFs), a new type of financial transaction execution entity created by the Dodd-Frank Act. SEFCON IV, to be held November 18, 2013, will feature a status update on SEFs from regulators, legislators, dealers, traders and other market participants. Conference Chairman Chris Ferreri offers a glimpse as to what attendees can expect in this video with former John Lothian News Editor-at-Large Doug Ashburn. [5]

On November 12, 2012, the WMBAA hosted its third annual swap execution facilities conference, "SEFCON III" at the Grand Hyatt, New York. The keynote speaker was CFTC commissioner Bart Chilton, who spoke about SEF rules, high frequency trading and position limits. Also on the agenda were panels on liquidity in the new market structure, a European report from WMBA Europe chairman Alex McDonald, and panels on SEF registration and technology challenges. [6] 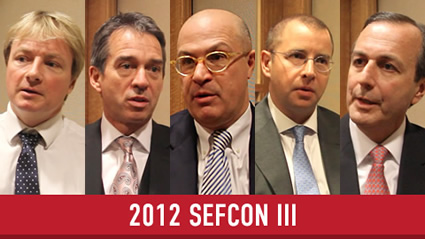 During 2012 SEFCON III John Lothian News interviewed five key members of the WMBAA. Click here to watch all the interviews or choose one from below: